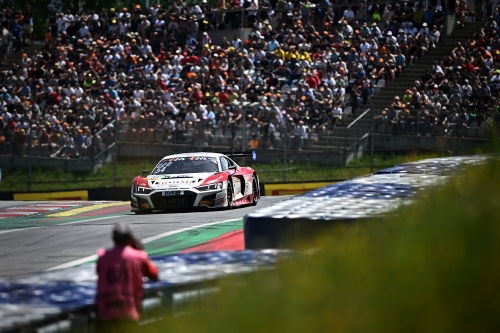 Spielberg/Austria: ADAC GT Masters races are always worth a visit, especially those that take place at the Red Bull Ring. Last weekend, fans came to the circuit to see spectacular racing accompanied by good weather and sunshine. The Austrian GT3 team Eastalent Racing competed in the race weekend with its drivers Simon Reicher and Norbert Siedler, both also from Austria. After the young team scored points in both races at their debut in Oschersleben, expectations for the home race were high. And yes – spoiler alert – the Austrians did take home points.

Simon Reicher was cautiously optimistic throughout the weekend: “Our goal as a team is to score points in every race. We managed our goal with 14th position in the first race on Saturday. But we must be honest with ourselves: we were not able to test at the Red Bull Ring before this race weekend, so we definitely feel some room for improvement.”

The weekend started well. The Austrians were on track and clocked in 15th and 11th during Saturday’s practice sessions. A Top-15 finish is important because the first 15 cars in the German GT Championship collect important championship points.

Simon Reicher analyzes the situation as follows: “We know some of our weak points, others not yet. We certainly need to improve our understanding of the car-tire combination. We really weren’t far off with a gap of just seven tenths of a second to the top. However, with 18 cars within half a second of each other, seven tenths of a second are suddenly worlds apart at the Red Bull Ring. All in all, the first qualifying session was not good. That one goes on me because I simply didn’t find my rhythm. The race, on the other hand, went well. We delivered a solid performance improving from 22nd to 14th position. The qualifying session on Sunday did not go as planned. We’ll now have to analyze the data and see what the problem was. Norbert already struggled with brake issues during qualifying. Braking problems are not good credentials for success at the Red Bull Ring because it is a high-speed circuit with many hard braking points. But that’s motorsports. Everything must fit together perfectly to win races. We will now use our time wisely to be best prepared for our next event in Zandvoort.”

For teammate Norbert Siedler the situation is clear: “We certainly had high hopes and expectations at our home race. I honestly expected the Audi would be a difficult car for a circuit like the Red Bull Ring, which is not a typical Audi track. Qualifying sessions are the be-all, end-all in the ADAC GT Masters. It would have been nice to perform a bit better because our race speed was generally good. We lacked power on the very long straights with uphill climbs. In the infield, the section of the track where the fast corners are located, we were always among the fastest teams. But with the three to four tenths of a second missing on the long straights, fully catching up is almost impossible considering how close together the field lies. We are optimistic about our next race in Zandvoort. I think the track suits the characteristics of our Audi better.”

The Austrians are eager for their next event. From June 24 to 26, the third round of the ADAC GT Masters will be held at Zandvoort in the Netherlands.