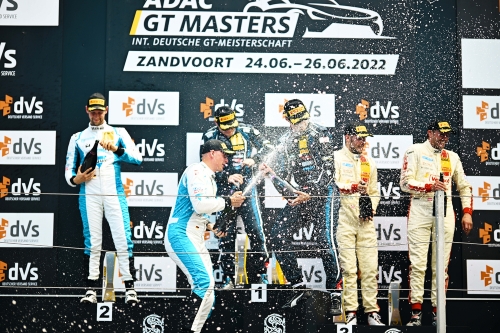 Zandvoort/Netherlands: The third race weekend of the 2022 German GT3 Championship took place last weekend (June 24–26) at Zandvoort in the Netherlands. For the newly founded Eastalent Racing Team from Austria, the event was a highlight in the ADAC GT Masters calendar. The team was particularly excited about the two banked corners constructed in 2020. Both Eastalent drivers were in agreement: “Going full speed through these banked curves is sensational,” raves Simon Reicher. Norbert Siedler adds: “This is unique for a circuit in Europe and it is insanely fun”.

Speaking of fun. Friday’s free practice sessions started with timed laps in second and fourteenth position. Simon Reicher comments on the strong start into the weekend: “We started free practice with the right setup. Sure, this also involved some luck, which was on our side this weekend.”

The Austrians eagerly awaited Saturday’s first qualifying session after Friday’s boost of confidence. This is when team manager Burkhard Hesseler’s experience and routine paid off. The qualifying session started, and the engineers wanted to wait a few more minutes before letting the car on track. Team manager Hesseler intervened after a quick look into the sky: “Get out there, there’s a big rain cloud coming up behind us”. His call was genius. The Eastalent car went out right away and while Simon Reicher was on his first fast lap, rain started coming down at the other end of the circuit. Most other teams had waited in the pit lane and now had to complete their fast laps on a wet track. Thanks to their tactical move, the Austrians finished the qualifying in sixth place.

Simon Reicher reports: “Our goal in the ADAC GT Masters is to score points, which means finishing between first and fifteenth. Even without a previous test at Zandvoort, we started the weekend with an excellent setup – and it paid off.” The first race started with a bang. The Audi R8 LMS Evo II already moved into fourth position after the first corner. Just one lap later, the #54 car was in third. Norbert Siedler was thrilled: “This is a great result and awesome weekend for us. We didn’t expect to be on the podium at our third race weekend as a team. Simon did a great job in his stint. He moved up into third position and kept the entire Audi armada behind him. After the pit stop, I took over the cockpit and was surprised how well we could keep up the pace. The car stuck to the asphalt very well. In fact, we matched the speed of the leaders.”

As expected, the second qualifying session on Sunday was more difficult. The teams who misjudged Saturday’s weather had a lot to make up for. And they did, as Norbert Siedler reports: “Sunday’s qualifying was not quite as successful. We finished in fifteenth, though we were only 0.546 seconds behind pole position. My fastest lap wasn’t ideal as I couldn’t take advantage of my tires’ peak performance. In the GT Masters everything must be perfect. The field is so competitive this year.” A closer look at the entry lists proves Norbert’s point. Among others, no fewer than six former Formula 1 drivers are racing in the ADAC GT Masters. But Eastalent was back on track with the right speed for the final race. The race strategy worked out and the team secured tenth position, an excellent result.

Simon and Norbert were thrilled and happy looking back on an exciting weekend. “A huge thank you goes to the whole team for a fantastic job!” All in all, the Austrians were very satisfied with their performance and are already looking ahead to the next event at the Nürburgring. “If we manage to arrive at Nürburgring with a great set-up again and have some luck on our side, we should also score points there. We would be very happy with a top ten finish,” says Simon Reicher.

The fourth race of the ADAC GT Masters season will take place at the Nürburgring August 7–9.